August 12, 2021In The newsby Jonathan Koziol 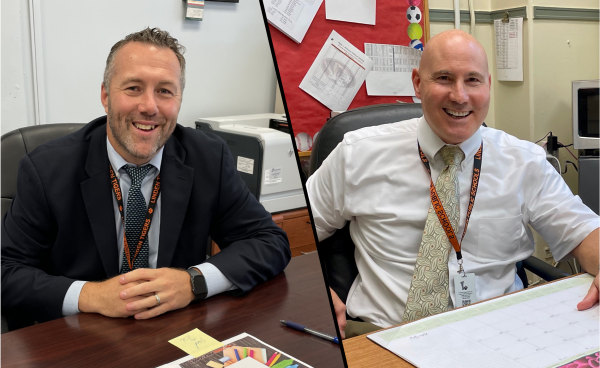 Two vice principals in Linden Public Schools are taking on new roles this school year and are eager to use their experience and relationships in the district to stand out in their new positions.

Both said that although they are sad to leave their longtime homes, they are looking forward to forging connections with a new group of students and staff members and using their experience to the benefit of both schools.

“When I was told I’d be coming to McManus, I was a little sad because I had been at the high school for 22 years,” Bandinelli said. “But then it didn’t take long, I thought about it for a little bit and thought, what a wonderful opportunity to work with a different age group. I think it’s going to be a great experience for me.”

Happel said McManus has always been like home, but he’s looking forward to what’s ahead.

Superintendent Dr. Marnie Hazelton said she feels both with thrive in their new roles.

“Ultimately, helping all of our students is the No. 1 priority, and I look forward to seeing both of these veteran administrators excel in their new positions.”

Wayne Happel always had a feeling he would gravitate toward coaching or teaching, from the time he was a kid organizing family activities or neighborhood games near his home in Edison.

“I was the oldest, so I feel like from a young age, I was always teaching,” he said. “So the teaching and coaching aspect comes kind of natural from just always doing it. Whether it was organizing games at my grandma’s house with the cousins, or with kids in the neighborhood. It’s just kind of who I was.”

Those natural tendencies have grown over the years into teacher, coach, and administrator, and now he takes on his new role as a vice principal at Linden High School. He says the high school is a “different animal” from McManus Middle School, where he spent parts of 17 years as a teacher or vice principal. But he is looking forward to working closely with students at a higher level of maturity.

“Some of the kids I met this summer might have been kids who might have been with me for trouble from time to time, but I saw some of that growth,” Happel said. “I’m excited to see that here, kids coming in from middle school still with that immaturity and growing into young men and women who are going to become productive members of society. In middle school, that’s still so far away because they’re such kids. Here you see the ‘adulting,’ where they are on the cusp of being adults.”

Happel will be working with the sophomore class, and his main goal is to make sure they are prepared for graduation and life when they leave in three years. A big part of that is establishing relationships with students, he said.

“I want kids to want to talk to me. I don’t want to just be that guy you go see when you’re in trouble,” he said. “That’s the hard part about the VP role. That’s kind of what people think of your job. Is that a part of it? Yeah, but I want to be more than that, and I want the kids to know that. And a lot of the kids from McManus do know that because I do build those relationships.”

Happel said he is grateful to have an administrative team of Principal Yelena Horré and three other VPs to help his transition.

“It’s great to work with a team,” he said. “They’ve been great in just showing me what to do, because I’m a little lost up here. So many kids, so many more staff. And I know it’s going to be a learning process, but I’m really lucky to have them.”

Happel graduated from the University of Delaware with a degree in history, and his path into education started as a paraprofessional at School No. 4 in 2003. The following year, he got an opportunity to teach history at McManus, and jumped at the chance.

He taught a wide range of history classes over the next 12 years, from resource classes to honors classes.

“I saw the whole gamut and loved each of them in their own way,” he said. “In the smaller resource classes, you get a real strong connection with the kids. In the honors classes, you can push them to do things that you may not think sixth- and seventh-graders can do, and they exceed expectations.”

While he was teaching, he also spent time as assistant coach for LHS baseball and girls volleyball and says coaching and teaching are essentially the same thing.

“When you’re coaching, you’re using sports for those life lessons, which is no different than a social studies teacher,” he said. “Learning social studies is great, learning math is great, you need that stuff. But it’s really about life skills, whether the conduit is social studies or math or baseball. The time management, the teamwork, the working toward a bigger goal, those are the things that are going to make you more successful in life than just, ‘Who was the second president of the United States?’”

Being an administrator wasn’t always on Happel’s radar. Then one conversation with an administrator, Jennifer Smith, who was then VP at McManus and is now director of elementary language arts/early childhood/federal programs, changed his mind.

“She said, ‘You’re so great with the kids, you should go into administration, you’d been great at it,’” Happel said. “And that one little thing she said put me on this path. Someone just saying, ‘You could be good at this’ can plant that seed.

Frank Bandinelli had been at Linden High School full-time for nearly 20 years, but his switch to McManus Middle School brings him back to some of his earliest days in the district. Prior to becoming a teacher, Bandinelli worked as a substitute teacher as well as in crisis intervention. Part of that time was spent at McManus.

“When I worked as a sub, I just felt at home and comfortable working with the kids,” he said. “I thought it was great. I didn’t want to leave. I kind of fell in love with the education profession.”

Now as vice principal, he feels he can once again have a great impact on middle school students in helping them prepare for their high school years.

“It’s a different perspective,” he said. “With my experience, I can help get them ready for the high school. I can give them the opportunity to know what to expect in order to be successful.”

So far, his transition to McManus has been “wonderful,” Bandinelli said. He is working alongside Principal Atiya Perkins, who has a strong background in elementary education, having been principal at Schools No. 2 and 6.

“Everybody is tremendously supportive,” Bandinelli said. “Everybody’s been welcoming. They help me in any way they can. Mrs. Perkins is wonderful to work for. She’s very helpful.

“It’s always been that way here in Linden. That’s why I always try to be supportive to new teachers, new staff, because I know what it’s like to get that support and I want to give it back.”

Bandinelli will also soon be working with a dean of students, a new position at both middle schools this year. That role is meant to work on student issues, including discipline, conflict resolution, social and emotional learning, and restorative practices. This should free up the vice principal to spend more time working with teachers and students in the classroom.

“I’m excited to get back in the classroom,” Bandinelli said. “I think it’s wonderful. I miss being in the classroom and getting that feeling, to bring the things that I know, and to learn from the teachers, and pass that information on. I think it will afford me more time to do that.”

Having grown up in Linden, Bandinelli knew both schools from his time as a student. He attended School No. 8 and McManus before graduating from LHS in 1979. He went to Montclair State University for two years, where he played football, and then went out into the workforce doing construction jobs.

“I knew I had to get my degree,” he said. “People I knew who had college degrees were afforded much better opportunities. That’s what motivated me to go back to school.”

After getting his bachelor’s degree in history and political science from Kean University, he became a social studies teacher at LHS in 2001. He taught mostly ninth-grade world history before getting his master’s degree from St. Peter’s College and becoming vice principal in 2008.

“I always enjoyed working with the kids and I still do,” he said. “Sometimes when I get in the classroom, I want to chime in. It’s hard just to sit back.”

Bandinelli will be getting used to his new role as the whole district tries to figure out what the new normal is after a year marred by COVID-19 and virtual learning.

“I’m most excited to meet all the staff here and mostly the students,” he said. “We’ve been out with COVID and I’m most excited about getting back with the kids for that in-person learning environment. I want to try to get back to that normal routine. It’s so difficult when you don’t have that regimen and routine. That’s what kids need. They need that solid structure.

“We all work together as a team here, in all the Linden schools, to benefit our students.”