Students collecting donations and sending messages of support to Ukraine

March 8, 2022In The newsby Jonathan Koziol 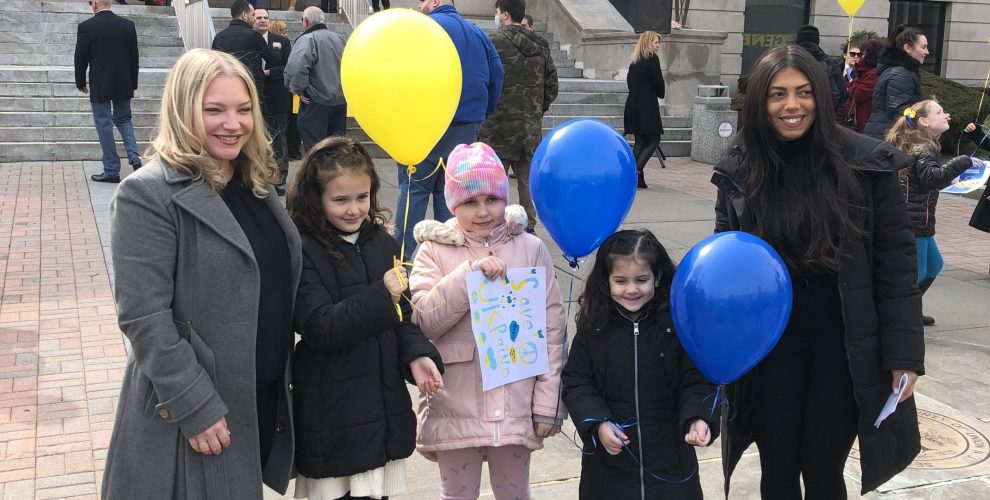 Linden High School is collecting donations to help the Ukrainian people who are suffering under the Russian invasion, and will hold a Peace Sit-in on Friday, March 11, to show support.

School No. 8 also collected supplies to be sent to the Ukrainian people, and are writing letters of support to the children of Ukraine.

“Some of our students are personally impacted by the suffering in Ukraine, and they want to help their family and friends who are in the middle of the war,” said Superintendent Dr. Marnie Hazelton. “But even those students who are just watching on TV or their phones realize the terrible hardships the Ukrainian people are enduring and want to do what they can to help.”

The LHS projects were started by a small but determined group of students of Ukrainian descent are doing what they can to help those fighting for freedom in their homeland. The students are collecting supplies and cash to help soldiers fight against the invading Russian forces and others who are suffering from armed attacks on their cities.

“What is happening to people of Ukraine, having their freedom and their way of life attacked, is just terrible,” Horre said. “For these students from Ukraine, it very literally hits home. We as a community at LHS are coming together to support them and their families and countrymen in any way we can.”

Donations of non-perishable food, blankets, and other necessities are being accepted in the lobbies of both buildings at Linden High School and will be sent to Ukraine through Meest-America, a shipping and mailing service that works extensively in Eastern Europe. The company’s switch to sending aid supplies to Ukraine was recently featured on ABC7 news.

“We want to help how we can, because we are here and they are dying there,” said Andriy Martsiyash, who works at Meest-America in Woodbridge and can be seen working in the background on the ABC7 report. “So the only we can help is to send them something, support them mentally. Anything we can collect from the schools will help them a lot.”

Some of the items that are needed include first aid supplies; food including peanut butter, canned goods, condensed milk, cereal; blankets, sleeping bags, and socks; personal hygiene products including diapers and feminine products; batteries and walkie-talkies.

Donations of cash can be made through the Ukrainian World Foundation USA at https://uwfusa.org/. Donations are accepted by credit or debit card on the website or by check.

Linden High School will hold a Peace Sit-in on Friday, March 11, when everyone is urged to wear blue and yellow in support of Ukraine. Students and staff will come out of their classrooms to sit in the hallway at precisely 2:23 p.m., to symbolize the date of Feb. 23, when Ukraine was invaded.

Suggested donations of $1 are being collected in each homeroom at LHS leading up to the March 11 observances. Each homeroom was also being encouraged to display a coloring of a sunflower to show support. Donations will go to UNICEF.

Students are encouraged to make signs or other shows of support. A group of students has been working with librarian Maria Colish to crochet small Ukrainian flags, flowers, and ribbons to be made into pins. The pins are being sold for small donations to the effort.

The School No. 8 collection was the idea of third-grader Anna Brum and was undertaken by the school’s K-Kids community service club. They collected first-aid supplies, hygiene products, baby supplies, and small food items for Be in Charge NJ, a non-profit dedicated to community service.

Anna also had the idea of writing letters to the children of Ukraine “telling them that we care about them and that everything will be OK,” said her teacher, Heather Astalos. Students have begun writing the letters.

“I want to thank Anna and her family with coming up with such a special and heartfelt idea,” Astalos said. “The School 8 community, especially the K-Kids student group has been extremely supportive and happy to help the children of Ukraine.”

Principal Michelle Rodriguez said she was not surprised by Anna’s generosity.

“This is the same little girl who years ago when we were raising money for a fellow student who was sick, she donated all her birthday money to the cause,” she said. “She is a student who thinks about what she can do for others and thinks even bigger to make it an overall community effort toward a cause. Shd is aware of how kids may feel during this tough, scary time, and she is selfless in her thoughts and charitable in her actions.”

Because of her thoughtfulness, Anna and her family was invited by Mayor Derek Armstead to take part in a Ukrainian flag-raising in front of City Hall on March 5. They were joined by Astalos, teacher Amanda Schweikardt, and members of the K-Kids.

“We hope that our efforts bring comfort to the people of Ukraine and that there is soon relief for the Ukrainian refugees in Poland,” Schweikardt said.

Rodriguez said she is grateful that Schweikardt and social worker Anne-Marie Spricigo put the plan into action.

“The School 8 community loves to get involved!” she said.

Khrystyna Sul, one of the Linden High School students who started the movement, said she has family in Ukraine who are doing whatever they can to help the soldiers fighting against the Russians. Her cousin is a soldier, her aunt is making food for soldiers, and her grandfather is working in a hospital.