March 2, 2022In The newsby Jonathan Koziol 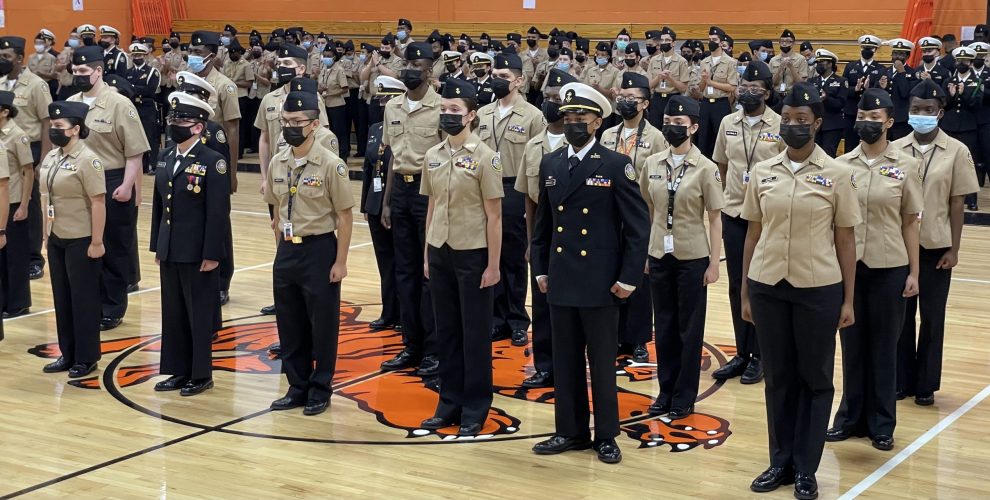 The Linden High School NJROTC stood up to the rigors of a full military inspection on Wednesday, Feb. 23, when active-duty personnel visited to give the regiment a meticulous once-over.

The Area Manager Inspection allowed the students to put their best foot forward before service personnel, as well as to a crowd of about 200 made up of their parents and school and community leaders during a ceremony that followed in the LHS gym. The Navy Junior ROTC unit consists of 450 cadets, about a quarter of the school population.

The ceremony was the first held in just over two years. Students were switched to virtual schooling just after the 2020 inspection, and the 2021 inspection was held virtually with no ceremony.

“It’s great to be back,” Commander Boyd Decker, senior Naval Science instructor at LHS, told the crowd. “What an amazing turnout.”

Decker credited his cadet leaders with holding the program together during the difficult days of the COVID-19 pandemic and remote learning.

“When I stand up here, I can’t possibly say enough amazing things about these kids that I get to work with every day. It’s a true privilege.”

Special recognition was given to six cadets who will be joining the U.S. military upon graduation. They were called to center court with their families and recruiters to great applause. Those cadets are Cristian Ventura (Navy), Carl Adolphe (Navy), Omar Thorne (Marines), Aiden Scaff (Marines), Gabriela Ulloa (Navy), and Solomiya Malanyuk (Marines).

“These individuals have already signed their contracts, they’ve already raised their right hands, and they’ve already taken their oaths to support and defend the constitution of the United States,” Decker said.

“Thank you for your service,” he told assembled cadets during the ceremony. “You’ve committed yourself to this service of bettering yourself, getting out of the comfort zone, instilling discipline in yourself and what you do. Life is going to throw challenges at you and by committing yourself to this service to yourself and your fellow cadets, and to the community, you’ll be in a much better spot for the challenges that are thrown at you.”

“I cannot extend enough praise and honor to these wonderful students standing before us,” Dr. Hazelton said during the ceremony. “I had the pleasure to work with a few of these students as part of my Superintendent’s Student Advisory Council. I tell you that they are some of the smartest and most outgoing and thoughtful and empathetic students that I’ve ever met. I know that you will go on to do great things, and I am honored to serve as your superintendent.”

Mrs. Horré reflected on seeing the regiment assembled for the first time in two years.

“It’s been a while since we’ve been able to assemble for something like this, and to come together for this event is something that is truly awe-inspiring,” she said. “I don’t think I make a secret of how proud I am of all of you here. Thank you for continuing to serve as models for our students and for our school.”

Mayor Armstead said he’s been coming to the ceremony for eight years and is always impressed.

“There isn’t a finer group of young men and women that go to Linden High School than yourselves,” he said. “You are the most disciplined, well-behaved students not only at this school, but anywhere I’ve ever been and you always make us proud. And you should be proud of yourselves. I’m confident you’re going to make the world a better place.”

Special recognition was given to cadets being promoted to chief petty officer by Naval Science Instructor Master Chief Mark Velez, who read the Master Chief Creed. The selectees are Hagr Elweshahy, Matheus Pereira, Haley Palma, Evelyn Ojeda, Isabella Gonzalez. Their families were invited to floor to join them for their promotion.

“She has made such an impact in such a short amount of time,” he said. “She demonstrates leadership just by the example she sets every day.”