School No. 1 engineers take on renewable energy challenge at NJIT 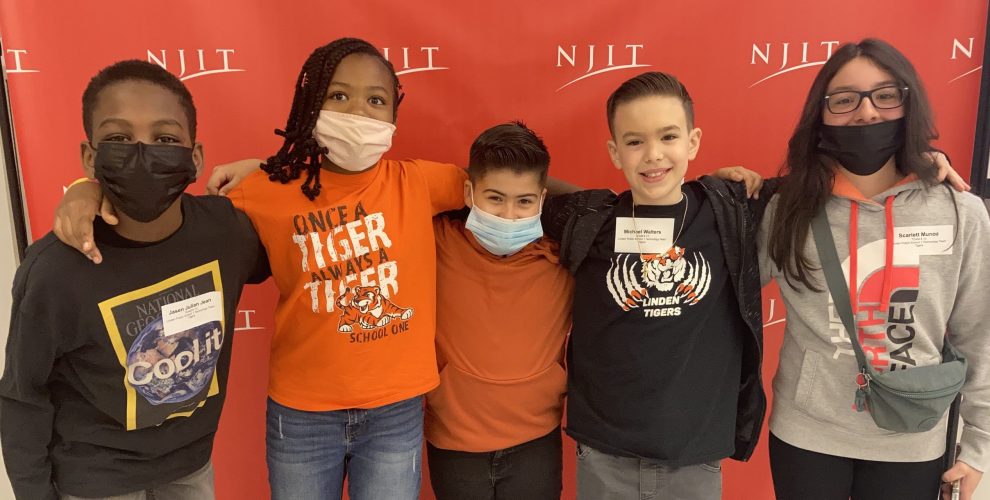 A team of young engineers from School No. 1 recently traveled to NJIT to take part in the eSTEM Challenge, a design competition in which elementary students design and build model machines that use renewable energy.

The challenge date of March 14 was the culmination of seven weeks of work in which five students used the Engineering Design Process to create a wind-powered vehicle out of simple household items. On the day of the challenge at NJIT, the students demonstrated their device and gave an oral presentation on their design processes, concepts, and evidence of teamwork.

The team was made up of fifth-graders Scarlet Munoz, Eddie Oliveira, Aminah Turner, Jasen Julian Jean and Tiago Jimenez, and they were led by coaches Acting Principal Michael Walters and technology teacher Kimberly Bachmann.

“It was an honor and pleasure helping guide them through this process,” Bachmann said. “This was our first competition and they rocked it! I was so proud. The whole experience opened their eyes to what their future could look like in the area of engineering and even a glimpse at what college life is like.”

CLICK FOR MORE PHOTOS FROM eSTEM CHALLENGE AT NJIT

The School No. 1 team placed 18 of 30 in the competition, including fifth out of traditional public schools.

“Not bad for our first competition,” Walters said. “Hopefully, this experience has shown our students that they are among some of the most talented young minds in NJ. I am very proud of our eSTEM team. They represented our district and the entire School 1 community with true excellence.”

He said it was a great opportunity for the students to use their creativity and problem-solving skills.

“Spending the day on the New Jersey Institute of Technology campus was a tremendous opportunity for our students to be a part of a college community,” Walters said. “I think they were impressed with the facilities and the campus itself.”

In addition to the demonstration and oral presentation, students were required to keep an engineering logbook of their work and to compete in a game-show-style question-and-answer challenge about wind energy in which the teams used the Kahoot! app to answer questions.

“Each student played a part in the eSTEM Challenge and truly worked as a team,” Walters said, “These five individuals are School 1 leaders and have very bright futures ahead of them.”