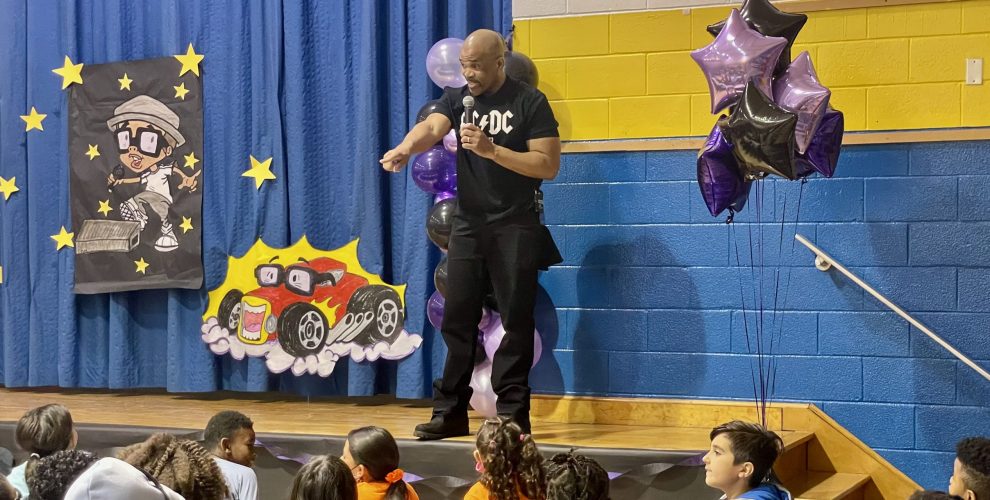 McDaniels spoke at School No. 4 on Tuesday, March 29, to that school’s third-graders as well as visiting students from Linden High School, and McManus and Soehl middle schools. Video of his appearance at School No. 4 was shared so that everyone in the district could join in his message. He also visited Linden High School for a sit-down interview with student journalists from TNT Student News.

He highlighted the importance of education, a love for learning, and hard work as the path to success.

“This educational opportunity is your preparation for the thing that you were put here to do,” he said at School No. 4. “Because if it wasn’t meant for you to be great, you wouldn’t be here. This morning has nothing to do with what Run-DMC is. This morning is part of your purpose and destiny.

“Education is just information. But when you receive that information that is education, there is a transformation.”

McDaniels was invited to visit with students by Superintendent Dr. Marnie Hazelton, who has worked with him since her days as a teacher on Long Island. McDaniels did not charge for his visit and spent hours at School No. 4 and LHS greeting students and staff, signing his book, and posing for pictures.

“We were so happy to be able to host Darryl so that our students could be inspired by his story of success,” Hazelton said. “He is able to engage students of all ages because he can understand some of the struggles they are going through, and show them that they can still end up on top.”

In introducing McDaniels to the crowd at School No. 4, Hazelton told the crowd a little bit about his career and the history of Run-DMC.

“I urge my younger scholars to Google Run-DMC,” she said. “They are an iconic rap group of many firsts: the first to be inducted into the Rock and Roll Hall of Fame; the first to have their videos played on MTV, when MTC still showed videos; the first to be on the cover of Rolling Stone magazine; the first rap group to go multiplatinum.”

McDaniels was visibly delighted when the program kicked off with School No. 4 teachers and staff doing a flash mob dance to the Run-DMC and Aerosmith collaboration of “Walk This Way.”

McDaniels’ discussed his new children’s book “Darryl’s Dream,” about his third-grade self, a shy and bookish student who others make fun of because he wears glasses. It explores themes of creativity, confidence, and finding your voice. Every third-grader in Linden Public Schools was given a copy of the book.

The older students who attended the assembly at School No. 4 are members of the Superintendent’s Student Advisory Councils at LHS, McManus, and Soehl, as well as students involved in the My Brother’s Keeper and My Sister’s Keeper mentoring programs.

The My Brother’s Keeper and My Sister’s Keeper programs started in February, and McDaniels’ visit was their first big event. The district hired eight mentors through federal ESSER funding to work with students at Soehl, McManus, and LHS. Mentors collaborate with parents, students, and teachers to advocate and strengthen relationships. More activities are being planned for the mentoring program, such as workshops, teambuilding activities, educational trips, and college and career readiness programs.

McDaniels drove the point home to the students gathered at School No. 4 that school is the path to success and not just here to make life difficult. He asked student to repeat after him, and they responded emphatically.

He closed out with a final thought on what students should take from his visit.

“I am the living, breathing show-and-tell that dreams do come true.”

In his visit to the TV studio at Linden High School, McDaniels was interviewed by TNT News seniors Branden Van Allen and Josiah Hanna. They asked him about some of the same topics he covered at School No. 4, but also about what music he was inspired by growing up and what he likes today; what it was like to grow up in Hollis, Queens; how he came to write a children’s book; and how he ended up visiting Linden.

McDaniels also opened up to them about heavier topics such as his struggles with alcohol abuse and depression, and that he learned late in life that he was adopted.

“Going to therapy is the most gangster thing a person can do,” he told them.

Students also showed him videos they created in his honor: a Run-DMC photo montage and a music video of LHS students singing the Run-DMC song “It’s Tricky.”