February 10, 2022In The newsby Jonathan Koziol 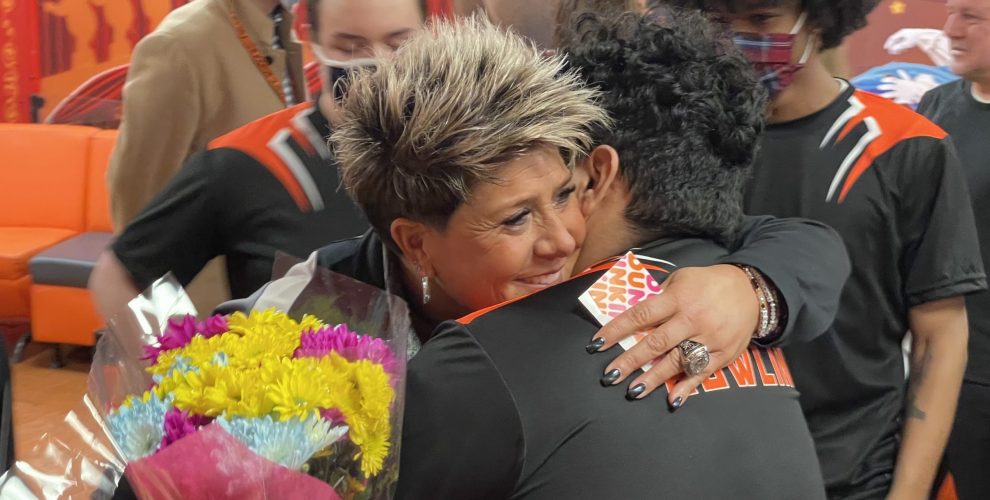 Cherie Pizzano, the Hall of Fame coach of the Linden High School bowling team, is retiring at the end of the 2021-22 winter season after 22 years of coaching the Tigers on the alleys.

Pizzano was surprised with a party in her honor at Jersey Lanes in Linden after the team’s final regular season match on Wednesday, Feb. 9. The party was organized by the parents of the bowlers, whose love for their coach was evident.

“It’s been a heck of a week for me emotionally,” Pizzano said at the party. “Since I was a little girl, all I’ve done was sports. My grades were first, sports second. I can’t tell you what it’s meant for me in my life to coach at Linden High School between softball and bowling for 28 years.”

The party guests included the current bowling team and many of their parents, as well as bowlers and parents from the past; Pizzano’s parents, two sons, and boyfriend; and Linden High School Principal Yelena Horré and Athletic Director Steven Viana.

“The relationships I have in the room here with you guys and the things that we’ve been through are just unforgettable,” Pizzano told her guests. “I pray and hope that I’ve impacted your life as much as you’ve impacted mine.”

The parents gave Pizzano a going-away present of a statue of a bowling ball striking two pins with the inscription “Thank you for all the wonderful years of coaching! Love your bowling family!” on the base.

Pizzano was selected for the New Jersey Scholastic Coaches Association Hall of Fame in 2019, becoming just the sixth Linden coach selected and the first woman from Linden.

The highpoint for the team came when it won the statewide Group 3 championship in 2020, becoming only the second Linden bowling team to win a state championship.

“When Coach first told us that she was contemplating retiring, I just said, ‘No, we’re not allowing it,’” Viana joked at the party. “We can’t replace a Hall of Fame coach, but for all her years of service, we cannot say thank you enough.”

Pizzano will continue in her job as a special education teacher of history at LHS.

“I have so many amazing memories and the hardest thing for me was to walk away,” she said.

“It’s the culmination of my coaching career, and I couldn’t ask for a better team to send off. And it’s not goodbye, it’s see you later. You know where my classroom is. I’m always going to be here for you.”