Courageous talk about effects of bias on students

March 8, 2021In The newsby Jonathan Koziol 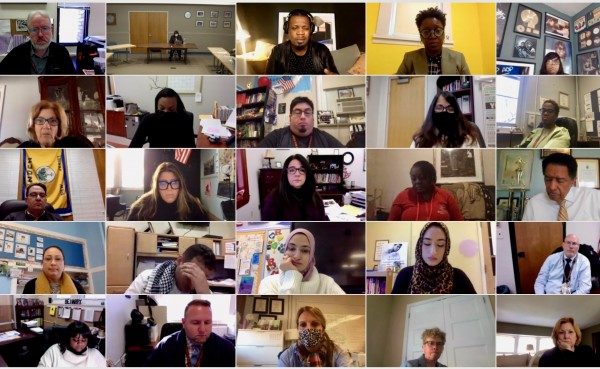 It was the day after Christmas 2020, and Keyon Harold just wanted to go to breakfast with his 14-year-old son. But as they were walking through their hotel lobby in New York City, Harrold’s son was falsely accused by a young woman of stealing her phone.

The incident escalated into a heated confrontation that forever changed the lives of Harrold and his son, and gained worldwide attention as an example of the inequities faced by young African-American men.

Harrold, a Grammy Award-winning jazz trumpeter, recounted this incident and discussed its wider meaning with Linden Public Schools administrators and staff members during a special virtual session called “Courageous Converstations: Adultification Bias and Its Impact on Children of Color.”

Harrold was invited to speak to Linden staff by Superintendent Dr. Marnie Hazelton to help shed light on inequities in our society, specifically how they affect school-age children.

“This is what I hope will be the first of many courageous conversations about race and equity in our schools,” she said. “It’s always a difficult conversation to have, however it is a necessary one if we are to truly understand and learn from one another.”

“Mr. Harrold is a Grammy-award winning trumpeter, but today he is joining us as a father.”

The session was moderated by Dr. Nichelle Rivers, an artist, social rights activist, and school administrator from Long Island. She and Harrold discussed with dozens of Linden educators over Webex what is meant by “adultification” of children in the educational and justice systems.

“It treats children as if they were adults,” Rivers said. “It really denies them the protections of childhood and excuses or even sanctions harsh punitive reactions to them.”

Harrold said adultification is just part of the larger system of inequities facing children of color.

“It is something that has always been for black kids, brown kids,” he said. “By the age of 9 or 10, they’re no longer cute anymore, so you treat them the same way you treat an adult. Or you try these kids as adults.”

Harrold talked about the December incident with his son as a prime example. He said the woman who accused his son had never met him before and had no reason to suspect him. Her phone was later found and returned to her.

“My son was just being himself,” Harrold said. “He comes downstairs and he’s wrongfully accused just because of the way he looks. There were so many people in the lobby, but he was keyed in as the person who stole her phone. The fact that that happens so often, that you choose the black person to pick on, you choose him as the target that ‘he’s a threat to me.’

“But meanwhile, this is a child. This child plays video games, looks forward to drums, and looks forward to having pizza. That’s it. But you’re looking at him as the person that’s trying to take you out or the person who wants what you have. You look at him differently, and those kinds of thing need to stop. And that really takes patience.”

The conversation was wide ranging, delving into various aspects of race and bias in society; Harrold’s upbringing in Ferguson, Missouri; and how educators can combat inequities. But it seemed to circle back to a central theme that people of color often are not given the benefit of the doubt. That was true of the incident in the hotel also, Harrold said.

“The woman asked to see my son’s cellphone, and the manager at the hotel demanded that his show his property,” Harrold said. “At this point it’s been 300 or 400 years of black people showing their property, showing who you are, ultimately showing your papers. ‘Show me that you belong here, boy.’

“I tried to show my son at the time that, ‘I need to preserve your dignity. You don’t know what that is quite yet, but after this scenario you will totally get it.’ I have spoken to him since about the fact that he didn’t understand what is happening. The implication of someone making you prove yourself, making you prove that you actually belong and what that does to your identity.”

The session featuring a dialogue between Harrold and Linden’s educators.

Board of Education President Doris Johnson asked Harrold if he would be using his music to engage young people. He said that he is creating a foundation called Music Against Bias to show students how bias can affect them when they are growing up.

Johnson said she worked on a cross-community engagement program in Jersey City, where she was a police officer. She challenged Harrold to make sure he include local groups to assist his anti-bias effort.

“Please include local facilitators and educators, law enforcement, community activists, parents,” she said. “Local people can really have an impact on that.”

Faten Sumrein, an English as a Second Language teacher at McManus Middle School, asked Harrold how a teacher who has experienced bias firsthand can talk to students about it without crossing a line that parents may not want them to cross.

“I’ve dealt with many forms of racism and prejudice growing up in this country post-9/11, balancing my culture and my American culture and having to explain myself,” Sumrein said to Harrold . “Similar to your son, I wanted to exist without having to explain wanting to exist. Wanting to be able to go to a store or going to a movie and constantly having to prove your worth.”

Harrold said showing students you have their back is key for educators.

“Instill trust with the children, that you have the best intentions with them,” he said. “And also being able to hit them with anecdotes about the good, the bad, and the ugly. ‘Trust me, I have your back.’ Sometimes kids don’t feel like they have somebody that has their back. Communicate with them on their mental wavelength while showing them there’s something bigger on why you’re saying it.”

Eloy Delgado, an ESL teacher at Linden High School and president of the Linden Education Association, said it’s important to recognize that other people have different circumstances than you do.

“By being a male, especially in education, I have certain privilege,” he said. “Sometimes we’re not cognizant of the privileges that we have. Sometimes people are taken aback by the word ‘privilege.’ It doesn’t mean your rich or whatever. All it means is that in society, people view you in a different light. The question to ask is, ‘What if my child was judged based on the color of their skin?’ How would that make me feel?”

“It really comes down to empathy to me, being able to get to a place where you can get out of your own self and realize that you don’t exist in a vacuum,” he said. “We’re all here to build a community, to build a society that takes care of everybody.”

The video for “Running (Refugee Song),” which was co-written by Keyon Harrold, was shown during Harrold’s session with Linden Public Schools educators.

Courtney Serpone, a vocal music teacher at McManus Middle Schools, said Harrold hit close to home when he spoke of how he uses music to help repair harm.

“As a music teacher, this was so impactful and validating to hear, especially since I frequently reflect on how the arts have such an incredible power to not just heal but create true systemic and social change,” she said. “As a district it is vital for us to move forward having conversations around equity, specifically ones that are centered around race. By building trusting relationships, talking about our differences in open, honest, and productive ways, examining our belief systems, and continually reflecting on our practices, we will work together to dismantle systems of inequity and allow for all to thrive within our district and community.”

Terri Todd, a secretary at Linden High School, said the session was inspiring and thought-provoking, particularly how it shed light on how “adultification” can affect Linden’s African-American students.

“It is way past the time for these conversations to be heard in our LPS district and the broader community,” she said. “These conversations must be taken seriously and with the intent to bringing awareness and change. Thank you, Dr. Hazelton, for leading the charge and taking on the responsibility of making this happen.”

Rivers, the moderator, said the session reminded her of the stark realities many children of color face when confronted with the presumption of guilt.

“Educators must reflect on their biases and unlearn them,” she said. “To that end, he so eloquently charged all of us with the mission of intentionally impacting change to protect the innocence of our children.”

In the aftermath of the phone incident with his son, Harrold said he was paid an unusual compliment by a friend.

“They said, ‘Out of all the people this could have happened to, I’m glad that it happened to you,’” he said. “The way you handle it, the way you take it and use to bring about change is important. To me that’s the ultimate compliment.”

Harrold conversation with Linden’s educators was part of that effort to find a silver lining in a terrible situation, and to turn it in to something positive.

“I’m pushing with all of my might and all of my talent in hopes of bringing about some change for the next generation.”

All schools will be virtual following Spring Recess