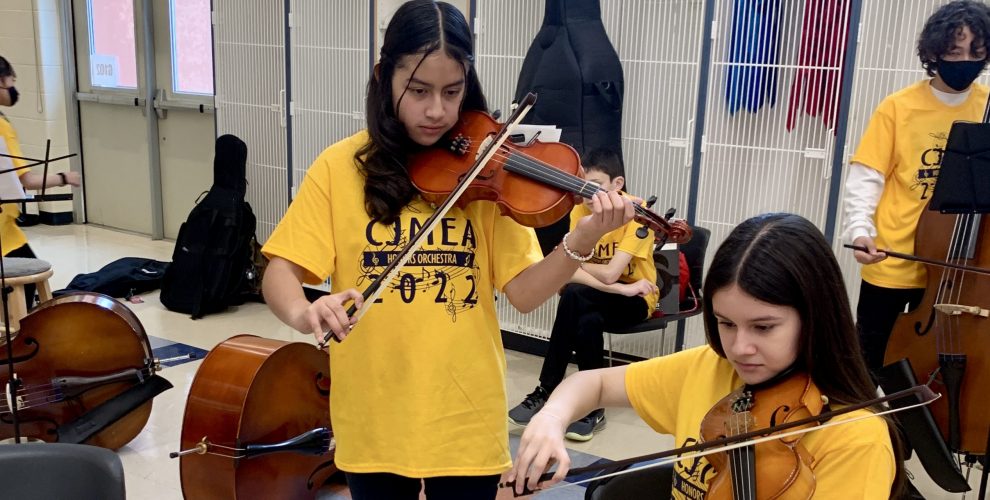 They joined students from all over Central Jersey on April 9 at Piscataway High School to perform in three orchestras representing different grade levels.

The students were selected because of their abilities, but especially their work ethic. They were provided with music three weeks in advance and practiced on their own or after school with their school’s orchestra director. After they arrived in Piscataway on Saturday morning, they rehearsed for 3½ hours with students from other schools, then performed a concert in the afternoon.

“We are so proud of these students to represent Linden in this huge event,” said Johnathan Birckhead, orchestra teacher at McManus and Soehl middle schools and a facilitator for the honors orchestras. “These are kids who have stuck with their instrument through the worst of the pandemic, and are proudly demonstrating their abilities, talents, and tenacity on a very large stage. They did a beautiful job, and we are so excited to watch their growth over the next few weeks, months, and years.”

The Red Orchestra of fourth- and fifth-graders and included Rosa Cintron from School No. 2.

The Gold Orchestra for fifth- and sixth-graders included Penelope Cortez and Camila Giraldo on violin from McManus Middle School, and Maggie Rodriguez and Anamaria Analco on viola from Soehl Middle School.

The Blue Orchestra of seventh- and eighth-graders included Joyce Fitz on viola and Eunice Gesare on cello from Soehl, and Alexa Pereira, Matthew Alam, and Pipelewaoluwa Olanrewaju on violin from McManus.

Linden Public Schools orchestra teachers Johnathan Birckhead from McManus and Soehl and Laura Addeo from School No. 2 also spent the day in Piscataway to facilitate the rehearsals for all the honors orchestras.