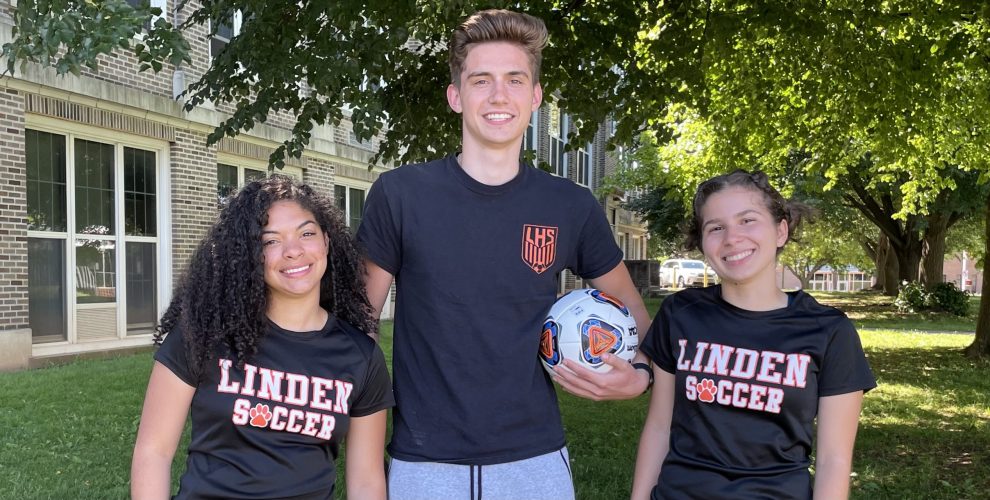 Three Linden High School seniors are being honored for their outstanding achievements in the classroom and on the field of play.

This year’s crop of scholar athlete awards was swept by soccer players.

Lauren Almeida, a captain and standout defender on the girls soccer team and manager of the girls basketball team, has been chosen as a scholar athlete of the year by the New Jersey State Interscholastic Athletic Association.

Daniel Ciepiela, a captain on the boys soccer team and the leading goal scorer in New Jersey, and Ariann Munoz, member of the girls soccer team and senior class president, were chosen as scholar athletes by the Union County Conference.

“These three seniors exemplify what it means to be a student-athlete in a Linden Tigers uniform,” said Athletic Director Steven Viana. “Lauren, Daniel, and Ariann each showed leadership and a will to win on the field while maintaining excellence in the classroom. They are terrific young adults who have bright futures ahead in whatever area they choose to pursue.”

All three are members of the Navy Junior ROTC, with Lauren and Ariann serving as part of the Top 12 Regimental Leadership.

The 2021 season was one of the finest in the history of LHS boys soccer, and Daniel Ciepiela was front and center the whole way.

The team finished the season 20-2 to win the conference championship, and was led by a remarkable campaign by Ciepiela, who led the state in goals with 39 and was named to the All-State team for Group 4. From his center attacking midfielder position, Ciepiela added 17 assists.

“As far as players I have coached, he is my top athlete by far, in terms of athletic ability and coachability,” said head coach Michael Mastriano. “Daniel is a natural born leader. He served as varsity captain for two seasons and led by example. His dedication to the sport of soccer was second to none.”

Mastriano pointed to the team’s game against rival Elizabeth, which was undefeated and ranked No. 3 in the state at the time, as evidence of Ciepiela’s importance to the team. He scored two goals and added an assist in the Tigers’ 3-0 upset.

Ciepiela marks that as one of his top memories as well.

“When we got to the field, there were a lot of fans and everyone was nervous because Elizabeth was a top-tier team,” he said. “I ended up scoring two goals and getting an assist. I felt like that was a really big accomplishment to beat them 3-0. The bus ride back was crazy. That was a good memory.”

Ciepiela, who ranks among the top 20 students in the class of 445, will be attending Kean University and majoring in athletic training.

“He pushes himself in the classroom by taking honors courses throughout his four years at Linden High School,” said school counselor Laura Golebiewski. “In addition to his academic talents. Daniel is a dedicated member of his school and community through a variety of activities. It has been an honor serving as Daniel’s school counselor the past four years and watching him shine as a student and athlete.”

Ciepiela said he was surprised to learn he was chosen as scholar athlete of the year.

“It’s rewarding,” he said. “Like the hard work paid off.  It shows that I can put in the work and that someone noticed.”

In her years on the LHS girls soccer team, Lauren Almeida has shown steady improvement year by year, finishing as a captain in her senior year.

“I have been fortunate to coach Lauren Almeida on the girls soccer team for the last three years,” said head coach Carla Silva. “From her sophomore year on JV to making varsity the following year, Lauren has always been determined to work her hardest and develop as a player on an off the field.”

In the classroom, Almeida has been a model of excellence throughout her four years, earning all A’s since her freshman year and finishing ranked No. 4 in her class.

“Lauren is the epitome of a scholar athlete!” said school counselor Laura Golebiewski. “It has been my pleasure watching her excel academically and on the field. Lauren excels academically with our school’s most challenging classes as she participated in honors and IB courses all four years.”

Almeida said she is proud of what she has accomplished academically and athletically.

“Getting an honor like this makes me really proud of all the hard work that I’ve done,” she said. “My growth in the sport and the knowledge I gained outside the sport, it really just hit me right now with getting this award. I really just appreciate all of it.”

Almeida plans to attend Stockton University – where she will be rooming with fellow scholar athlete Ariann Munoz – to study criminal justice with an eye toward a career in law enforcement. To that end, she said her favorite class at LHS is psychology with teacher Jorge Alvarez.

“Psychology is involved in my career goal,” she said, “and I just like to know about the mind and the way people do things and why they do what they do.”

Besides psychology, she also takes biology; English; Spanish; and sports, exercise, and health science in the International Baccalaureate program, and she is a member of the National Honor Society.

“Lauren displays the work ethic that coaches hope for in their captain,” Silva said. “With her motivation, she leads by example on and off the field. Her determination and work ethic has made her the soccer player that she is, and it has also made her a very high achieving student.

“I am excited to see what more she’ll accomplish in her bright future ahead.”

Ariann Munoz has used her positivity and determination to earn the success she has enjoyed on the soccer field and in her classes.

“Ariann is one of the most positive, kindhearted, and determined student athletes I have coached over the last few years,” said head coach Carla Silva. “Since sophomore year, Ariann has been that energy every team needs to make it through the long hours of the soccer season.”

Munoz said being chosen for the scholar athlete award was a pleasant surprise.

“I never played a sport in hopes of getting a scholarship, it was just for the love of the game,” she said. “So this was just a fun thing to do, but it was great to get recognized for being a good team player.”

Looking back at her senior year on the soccer team, Munoz said the moment that stands out to her is her first goal, on a header off a corner kick that helped the Tigers defeat Rahway.

“It was kind of an accident,” she said laughing. “Everyone was like, ‘You did it!’ and I was like, ‘What? No way!’ I didn’t even realize I did it because it just fell on my head, but that was a good memory.”

That goes along with Munoz’s personality, her coach said.

“She is encouraging as a teammate and strives to be her best self every day,” Silva said.

Munoz will be attending Stockton University and rooming with fellow scholar athlete Lauren Almeida. She plans to major in nursing and is considering joining the weightlifting club.

At LHS, she said her favorite class was English.

“I like writing and storytelling,” Munoz said. “Even though that’s not my major, I enjoy it.”

In addition to English, she also took Spanish as part of the International Baccalaureate program, as well as honors calculus. She is senior class president, a member of the National Honor Society, and ranks among the top 10 students in the class.

“Ariann has been one of the most exceptional and hard-working students I’ve had the pleasure of working with the past four years,” said school counselor Elba Ceballo. “She’s one of the strongest and most dedicated leaders I’ve met, in the classroom and in activities.

“Ariann is ready to embark on a new journey and succeed in the future.”

Congrats to all 2022 Linden Graduates!
Comments are closed.
View Calendar