Speaker challenges middle schoolers to believe in themselves and bounce back 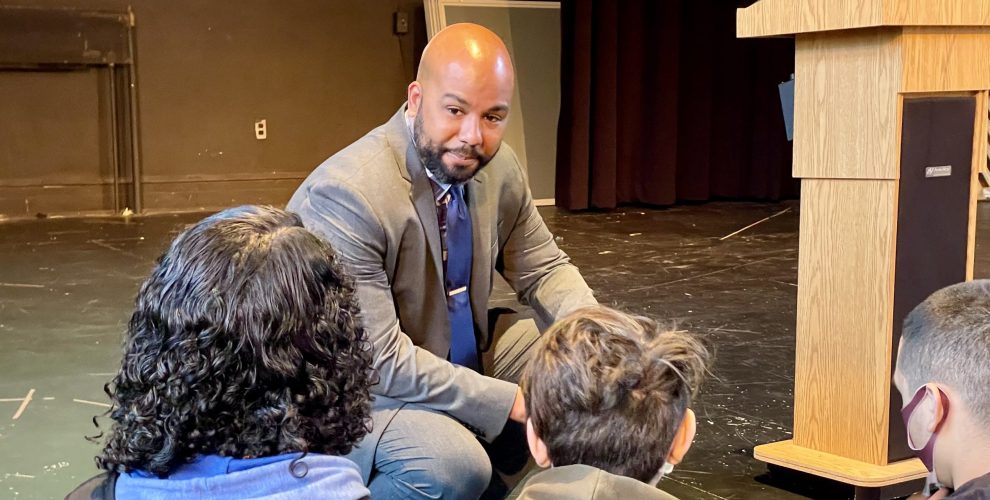 Students at McManus and Soehl middle schools got a chance on Friday, March 4, to hear uplifting and challenging words from a speaker who addressed essential “soft skills” for personal growth.

Richard Celestin is known as the Inspirational Lawyer. He is a practicing attorney and professor who speaks on topics such overcoming adversity, career paths, and criminal justice.

With Linden’s middle school students, Celestin discussed topics such as conflict resolution, emotional intelligence, communication skills, problem solving, and public speaking. He hosted two sessions as McManus in the morning, and two sessions at Soehl in the afternoon.

He also discussed resilience, focusing specifically on how students have begun to bounce back from the great difficulties of COVID-19 and remote learning over the past two years.

“You’ve already shown a level of strength that every adult in here could honestly say we have never had to go through what you guys went through. Ever,” he said. “So I admire every single student in this room. I admire your courage and I admire your resilience. Because I don’t know if I would be able to do what you guys did.”

Celestin told students he was going to tell them something that is different from everything they have been told since kindergarten: He wants them to be selfish.

“That doesn’t mean you don’t help out the person next to you,” he explained. “What I’m telling you is to make sure you are making a decision in your best interest before you worry about anyone else.”

He used the analogy of passengers on an airplane, who are told that if the cabin loses pressure, they should put on their own oxygen mask before helping out a child or anyone else who needs assistance.

Celestin’s appearance was made possible through the district’s Middle Grades Career Awareness and Exploration Grant.

Celestin told the students that people are naturally their own biggest critics, but that they need to believe good things about themselves in order to be successful.

“Whenever anyone talks negative about you, don’t internalize that. Don’t start to believe that. You turn that volume down,” he said. “When somebody compliments you, they tell you, ‘I think you’re doing an awesome job. I think you’re amazing.’ Don’t dismiss it. Internalize it. Turn the volume up.

“They see something in you that you may not see in yourself. So don’t dismiss it.”

New student-run news show is eyes and ears of McManus

Hundreds of LHS students stand up for peace for people of Ukraine
Comments are closed.
View Calendar