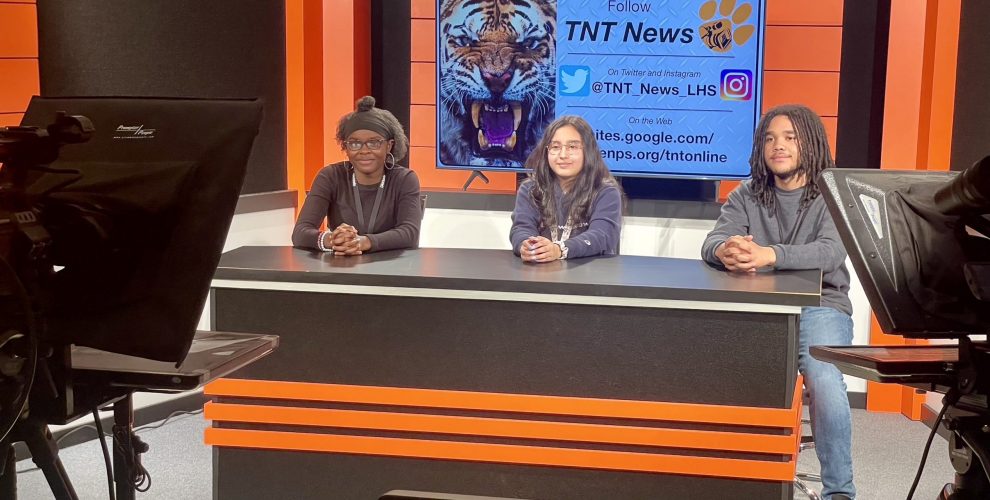 Students who anchor the Soehl Middle School morning news recently paid a visit to the Linden High School TV/Digital Media program to get a glimpse at what the future could hold for them.

“The experience was eye opening for sure,” Eunice said. “It gives me something to look forward to when I get to the high school.”

The girls gained a lot of good information about the TV/Digital Media program during their visit to LHS with advisers Laura Astone and Russ Marchica. For example, to be a part of TNT News, students must first take a half-year TV/Digital Media 1 course taught by Chris Paskewich.

“I’ve already signed up for the first TV class next year,” Eunice said.

The girls also got a tour of the studio’s control room, where high school students explained equipment and how to operate it. They learned about the sound board, video switcher, lights, cameras, teleprompter, and video editing.

“It was a great experience,” Maria said, “and made me very happy and excited to get to the high school and join TNT News.”

Astone said she was impressed with the TNT News students and the LHS TV studio.

“It was a student-run classroom from the moment class began,” she said. “The students knew exactly what their role was and were beyond knowledgeable in regards to TV/video production. We learned some very valuable information, which we look forward to bringing to the SNN.”

The Soehl News Network just launched this year with daily live streaming of school announcements. They hope to expand it in the future to have more student-produced features.

“Seeing the students in full control of the TNT newscast and working behind the scenes was impressive,” Marchica said. “We will bring that with us to the middle school.”

“Eunice and Maria did an amazing job,” Paskewich said. “It was nice that they wanted to host and were not afraid to work with the high school students.”

Paskewich and Miller have been in contact with teachers at both middle schools and a few elementary schools about their student news broadcasts and possible visits to LHS.

“Some of the schools are really doing great work,” Miller said. “We hope they stick with it through high school. It would be great for TNT News to have that kind of talent and work ethic coming into our program.”

Paskewich hopes to have more students come to visit the LHS studio.

“It’s fun helping the other schools in the district build their TV and broadcast programs,” he said, “and use what we do here as an example.”