School No. 10 third-grader raises over $2,000 for Friends of Linden Animal Shelter

January 24, 2022In The newsby Jonathan Koziol 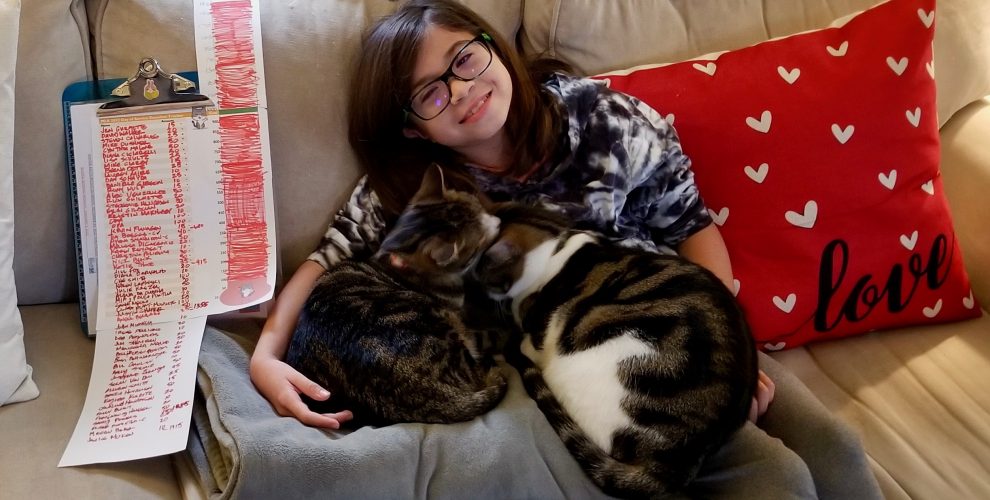 A third-grader from School No. 10 was able to raise well over $2,000 for the Friends of Linden Animal Shelter as part of a selfless service project she took on for Martin Luther King Day.

Amelia Hanger started the project two years ago when she raised $400 for the shelter and continued it last year by raising $1,000 for the Linden Presbyterian Church food mission.

Amelia said she is proud of the continuing success of her annual project.

“I feel good because we know we did something good for the world,” she said. “This was the most money we ever raised and was the most success we have ever done.”

Jennifer Pankow-Hanger, Amelia’s mother, said the project raised $2,000 directly, which Amelia used to buy pet food and other supplies for the shelter. She had also put the word out that donors could contribute directly to the shelter, which received $1,900 in donations on its website during the week of Amelia’s project.

CLICK TO DONATE TO FRIENDS OF LINDEN ANIMAL SHELTER

“Not all comes from our efforts alone,” Pankow-Hanger said, “but it’s a pretty staggering thing to know that we started out a few years ago with an idea and raised $400, and this year we’ve raised almost 10 times that amount.

“Our entire family are all incredibly proud that Amelia has taken up the idea and that her passion for animals, and cats specifically, have inspired so many to share in our desire to do good in our community.”

Amelia wanted to help FOLAS, which is where her family adopted two cats, Michelle and Michael, in the past year.

“I picked the animals since it is winter and they might need homes so they don’t get cold and die in the cold,” she said. “I love cats so much because they are nice, and they are good service animals, too.”

She was also inspired by what she has learned about the Rev. Martin Luther King Jr.

“He made the world a better place,” Amelia said. “And our service project is good because it is showing we are helping out the world.”

Pankow-Hanger said she learned a lot about how MLK Day can be used as a day of service and wanted to pass that lesson on to her daughter.

“We loved the idea that we could honor and serve on that day and embraced the idea of ‘a day on’ rather than a day off,” she said. “That started us down this path.”

Steve Hanger, Jennifer’s husband and Amelia’s father, said he is very proud of his wife and daughter for putting this project together.

“They inspire me to want to be a better person each and every day,” he said. “Their kindness and thoughtfulness have truly left a mark on our community.”

And on Linden Public Schools.

“Amelia’s efforts to help her local community at such a young age are remarkable,” said School No. 10 Principal David Walker. “Her service to others greatly embodies the mission of Dr. Martin Luther King Jr. Day. She is truly a wonderful student with a big heart, supported by her incredible family.

“We are so proud of Amelia!”

Tech students from Schools No. 4 and No. 9 accepted into inventors competition
Comments are closed.
View Calendar