December 2, 2021In The newsby Jonathan Koziol 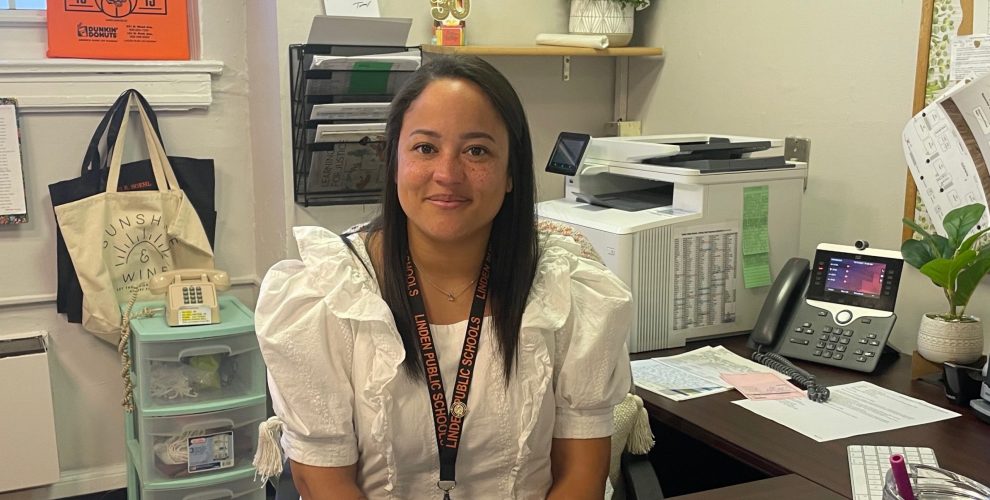 Angela Paternostro grew up elsewhere, but Linden was always like a second home. Having a mother who was a teacher in the district kind of made her an honorary Tiger.

“I’ve been coming to things in Linden for forever,” she said. “Going to board meetings, meeting people. I remember going to Bring Your Child to Work Day at the Linden High School Academy and meeting the high school kids. Even as I got older, I could feel the vibes of it being a good place and a good community with good people.

“And having gone to schools outside of Linden makes me appreciate what goes on here. I never had a lot of what these students have.”

Paternostro brings that love for her adoptive hometown into her new job this school year as vice principal at Soehl Middle School, where she hopes to use her passion for building relationships to help struggling students find a path to success.

Her focus is on restorative practice, which uses mediation, conflict resolution, and community building instead of punitive measures as a response to student behavior issues.

“I don’t believe in always having to suspend a kid for something where there are other strategies to fix it,” Paternostro said. “My goal is to embody what it means to be restorative and spreading the good news of what it can do to staff and students. In working with students when they come in, it’s nice to be able to say, ‘How can we do things different the next time?’ to put the idea out there that our actions affect more than just that moment in time.”

“Having gone to schools outside of Linden makes me appreciate what goes on here. I never had a lot of what these students have.”

She said she’s already had some successes in talking to students about issues to find root causes and ways to correct the problem in the future. Her own history as a student may have helped in that area.

“I was always the student who was in the principal’s office,” she said, “and I feel very strongly about telling my story. Some students just need someone they can trust. We want students to learn, that is our ultimate goal. But learning doesn’t just occur out of a book.

“I was these kids, and I’m grateful to have that experience now.” She laughed and added, “Sorry Mom.”

Paternostro’s mother, Alphonsina Paternostro, was a world language teacher in Linden starting in 1976 — teaching Spanish, French, and Italian at Soehl and Linden High School — and retired in 2018 as the supervisor of world language/ESL/bilingual.

“My mom was an immense influence on me,” Angela Paternostro said. “Her first teaching job was here at Soehl and she can’t get over that I’m here today.”

Paternostro holds a master’s degree in education from St. Peter’s College and spent some time in law school before pursuing education full time. Her first job was as a replacement English as a Second Language teacher at McManus Middle School. She has spent the past five years as a fifth-grade teacher at School No. 8, where she blossomed under the leadership of Principal Michelle Rodriguez.

“Being at School 8 was just phenomenal,” Paternostro said. “The community there was diverse and experienced and welcoming. The principal there had a vision. Michelle wants everyone to succeed, from students all the way up. It was incredible. Being there, I was able to grow as a professional, but also into this position. She really encouraged me. That’s definitely what led me here.”

Paternostro is excited for her new opportunity at Soehl, but is still getting used to the differences from the elementary level to middle school.

“The biggest change is working with so many staff and so many students,” she said. “There, you could know every student’s name. Here, I’m still working on it. But staff members have been so kind and welcoming and willing to share their areas of expertise and wanted to learn about me. My philosophy was that I’m coming into your house. I want to assimilate to the culture of the building. I’m so grateful, especially for Ms. Long.”

Soehl Principal Gwendolyn Long said that Paternostro is a wonderful addition to the school community and that Soehl is fortunate to have her.

“Her vibrant personality is easily recognized as she travels throughout the halls of our school,” she said. “She utilizes her strong leadership abilities to implement new initiatives and build on the ones currently in place. What stands out most about Angela Paternostro is her dedication and passion for supporting our students. Even when challenges arise, Ms. Paternostro always makes our students her first priority.”

Part of putting students first is making connections with parents. Paternostro said she is trying to change the perception that when a vice principal calls a parent that it means the student is in trouble.

“At first when I was calling parents, they would say, ‘Oh my God, what did my kid do?’ But now that is also changing, because we’re also here to celebrate the good,” she said. “So doing that when the occasion arises is awesome. Because when parents feel you have faith in their kid, they have faith in you. And that builds the community that supports this school.”

Despite the challenges of getting used to a new position in a larger school, Paternostro is happy with the progress she is seeing and the connections she is making with students.

“Most days are really good days, even when they’re hard.”