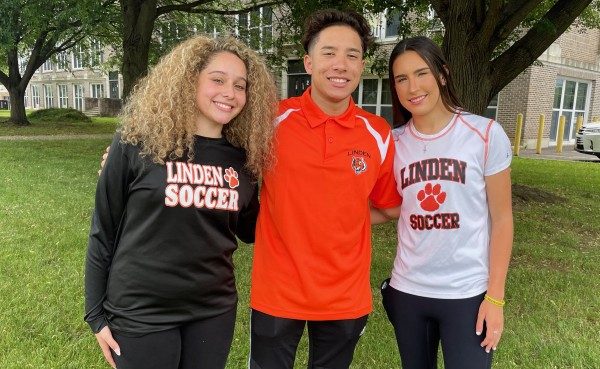 Linden High School senior athletes Annika Labrador, Landy Garcia, and Mackenzie Barrett have excelled on the field of play as well as in their schoolwork.

Three Linden High School seniors are being honored for their outstanding achievements in the classroom and on the field of play.

Mackenzie Barrett, a captain and standout defender on their girls soccer team, has been chosen as a scholar athlete of the year by the New Jersey State Interscholastic Athletic Association.

Landy Garcia, a member of the swimming team, and Annika Labrador, a captain on the girls soccer team and member of the girls volleyball team, were chosen as scholar athletes by the Union County Conference. Garcia and Labrador also hold the top two ranks in the LHS Navy Junior ROTC program, as commanding officer and executive officer, respectively.

“These three student athletes are outstanding choices to represent Linden Tiger athletics,” said Athletic Director Steven Viana. “Each was an outstanding contributor to their team while maintaining excellence in their studies. Mackenzie, Annika, and Landy are terrific young adults who have bright futures ahead in whatever area they choose to pursue.” 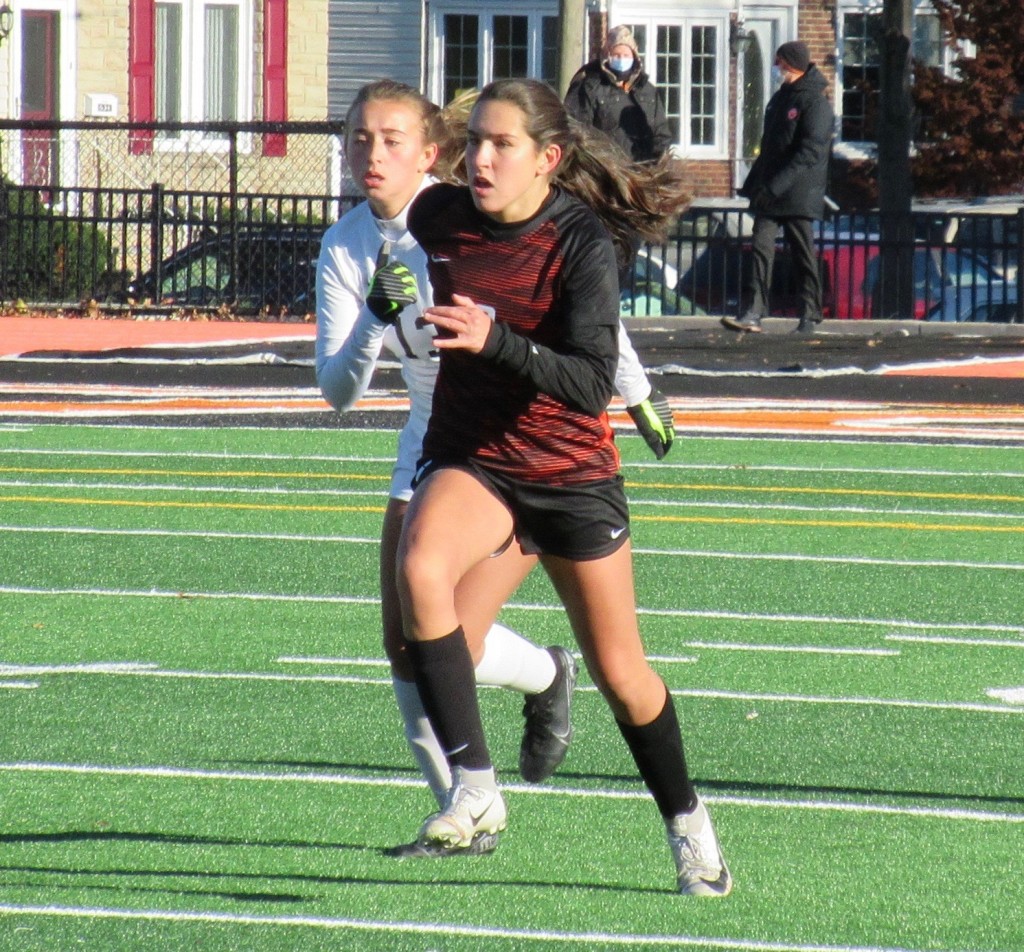 Mackenzie Barrett has scored 14 goals and 3 assists in her career on the girls soccer team. She scored 6 goals this year despite playing as a defender.

“That shows how dedicated and determined she is on the field,” said girls soccer coach Carla Silva. “Mackenzie is one of the hardest working student athletes I have worked with over the last few years. She is relentless as an athlete and continues to strive to be the best she can be in all that she does.”

Barrett has signed to play Division 1 soccer for Fairleigh Dickinson University in Teaneck, where she will major in nursing.

“During her time at Linden High School, Mackenzie has made enormous impacts,” said school counselor Laura Golebiewski. “She is extremely self-motivated and hardworking, and the epitome of a scholar athlete. Talented on the field and a leader in the classroom, she will be sorely missed at LHS. I know that whatever path Mackenzie takes she will be successful and continue to positively impact those around her.” 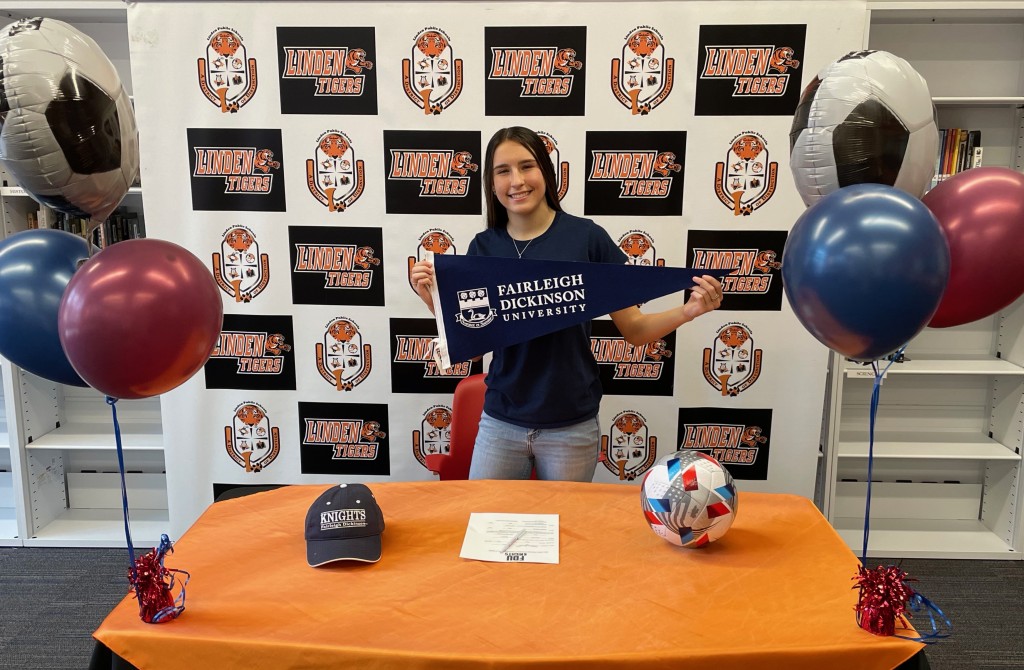 Barrett, who is an International Baccalaureate student and says IB English is her favorite class, was honored and shocked to learn of her scholar athlete award.

“It shows that all my hard work is paying off and all the time and dedication is showing, on and off the field,” she said. “I put a lot of pride and joy into my grades, and I’m glad to see I’m getting a combination of both.”

“It took a lot of trial and error,” she said. “It was a lot of long nights trying to figure out what classwork needed to be done at what time and how long it was going to take for me to do it. Do I have to do it on the way to practice?” 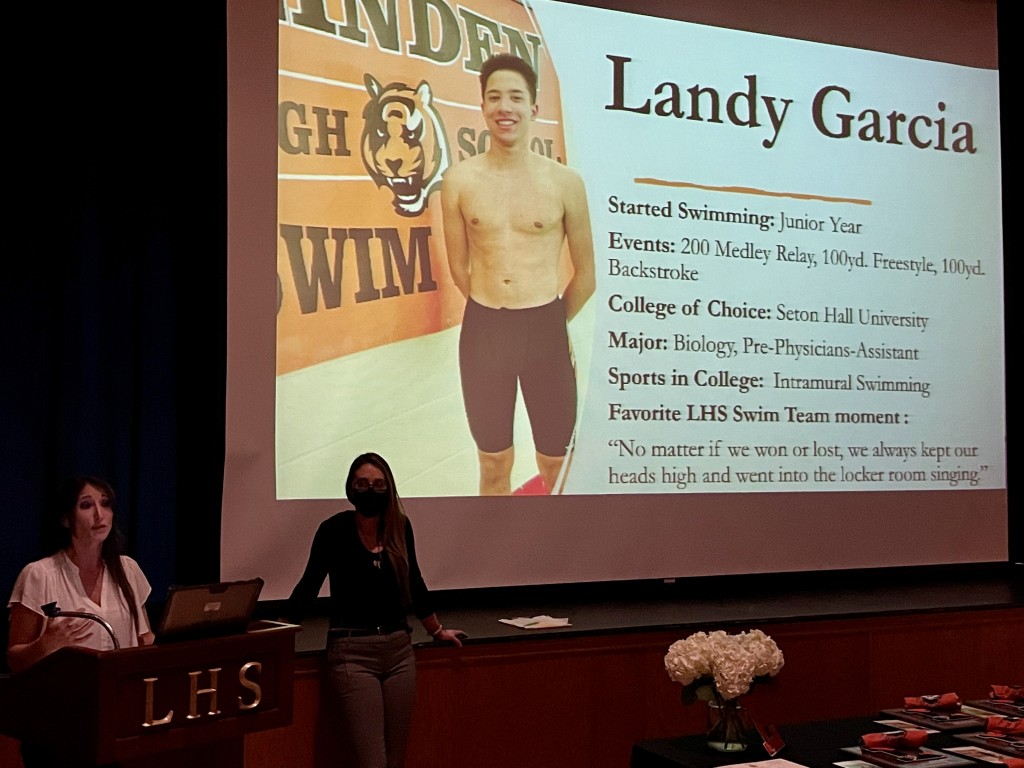 Landy Garcia was surprised to learn of scholar athlete award. After all, he was on the swimming team for just two year and he had friends involved with sports for four year at LHS.

But in that time, he has made a great impact on his team and throughout LHS.

“Landy is the epitome of Tiger Strong,” said swimming coach Nicole Gelfand. “His hardworking spirit and positive energy is uplifting. As his swim coach and former teacher in middle school, I am truly proud to watch his growth. Landy’s leadership qualities are one of his strongest attributes and will him to great success in life.”

Garcia will attend the University of Delaware and major in medical diagnostics. He said his favorite class is Sports, Exercise, and Health Science in the International Baccalaureate program, because it relates to the field he wants to pursue. He also takes IB English and Spanish. 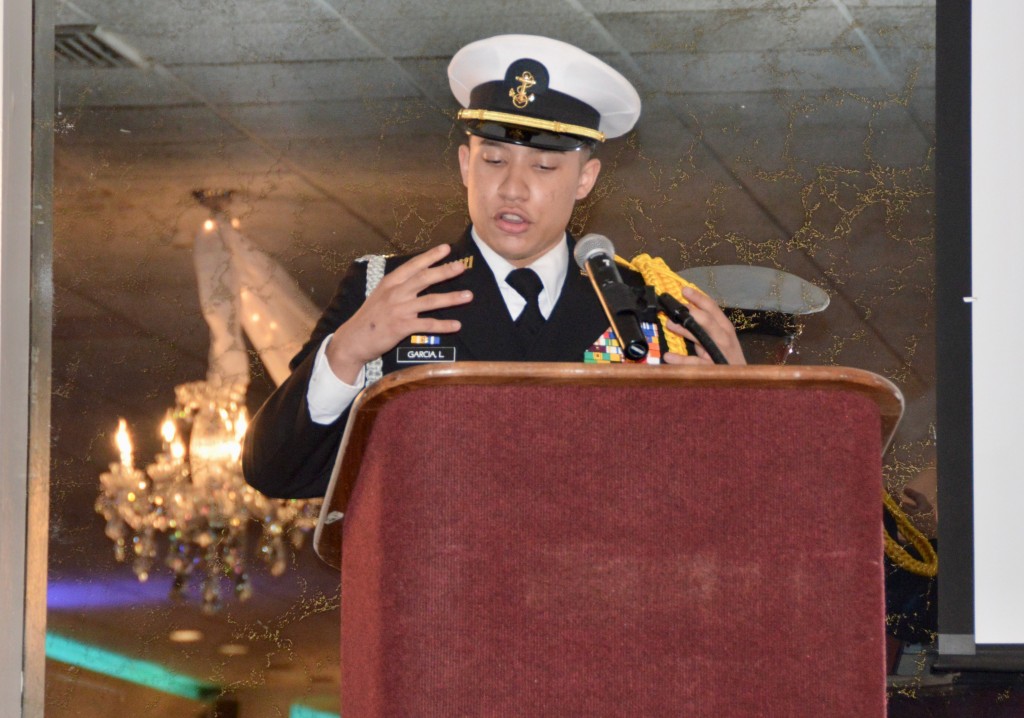 “Landy demonstrates a strong desire to learn and achieve,” said school counselor Helena Augustyniak. “He is focused, dedicated, confident, dependable, and extremely diligent. He has displayed a great deal of responsibility and hard work in his classes. He has original viewpoint that enables him to think outside of the box.

“In addition to his strong academic performance he has a vibrant and positive attitude. He is creative, original, and has a good sense of humor.”

Garcia said he has worked hard to balance schoolwork, sports, and NJROTC.

“Anybody who’s a student athlete will tell you it’s really, really difficult,” he said. “The best tip I can give is just time management, and also getting a lot of sleep, because you’re going to be tired after practice. Eat right, I know it’s hard to eat right especially because we have so much access to fast food and processed foods, but it’s really good to drink water, eat right, get a lot of sleep. 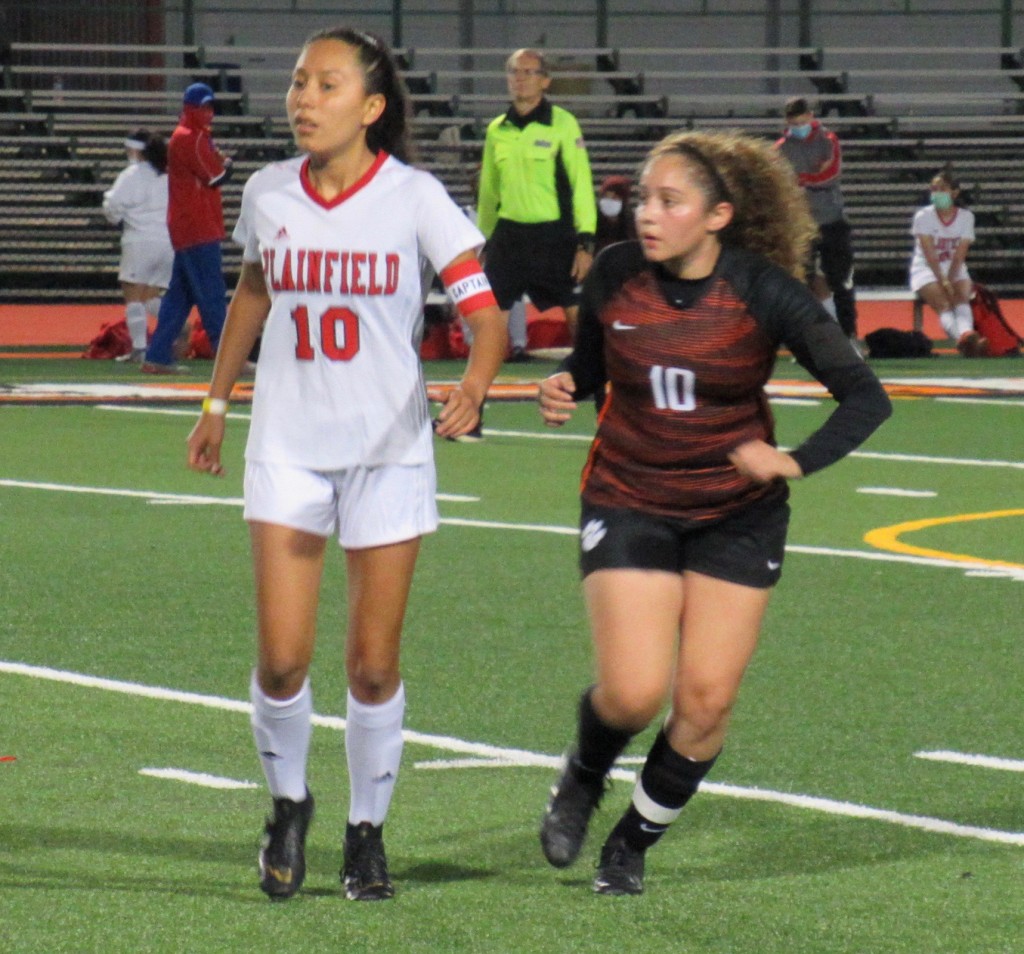 One aspect of Annika Labrador’s personality that stands out – whether as a captain on the soccer team, a newcomer to the volleyball, or an officer in NJROTC – is her positivity.

“I have been fortunate to coach Annika this past fall season,” said girls soccer coach Carla Silva. “This year, especially under all obstacles of the fall season, Annika has shown to be a young woman of character, intelligence, and talent. She displays the leadership and work ethic that any coach could only hope for in their varsity captain.”

It was that attitude that allowed her to excel at volleyball in her first year on the team.

“Her positive attitude on and off the court along with her athletic ability earned her a starting position on the team,” said girls volleyball coach Marissa DelloRusso. “She made her presence known on and off the court. She hustled to everything, played extremely hard, and was eager to learn the game. By the first scrimmage she had all the positions and rotations mastered and was eager to get a chance to show her ability.”

Labrador, who’s favorite classes are history, physics, and calculus and who also takes IB English, Spanish, and 20th Century Topics, will be attending the University of Delaware and majoring in mechanical engineering.

“What sets Annika apart is her intelligence and warmth, as well as her ability to not only adapt, but to lead,” said school counselor Laurie Juliano. “She is an involved student athlete excited to make her mark on the world, while enthusiastically exploring all the learning experiences she can garner.” 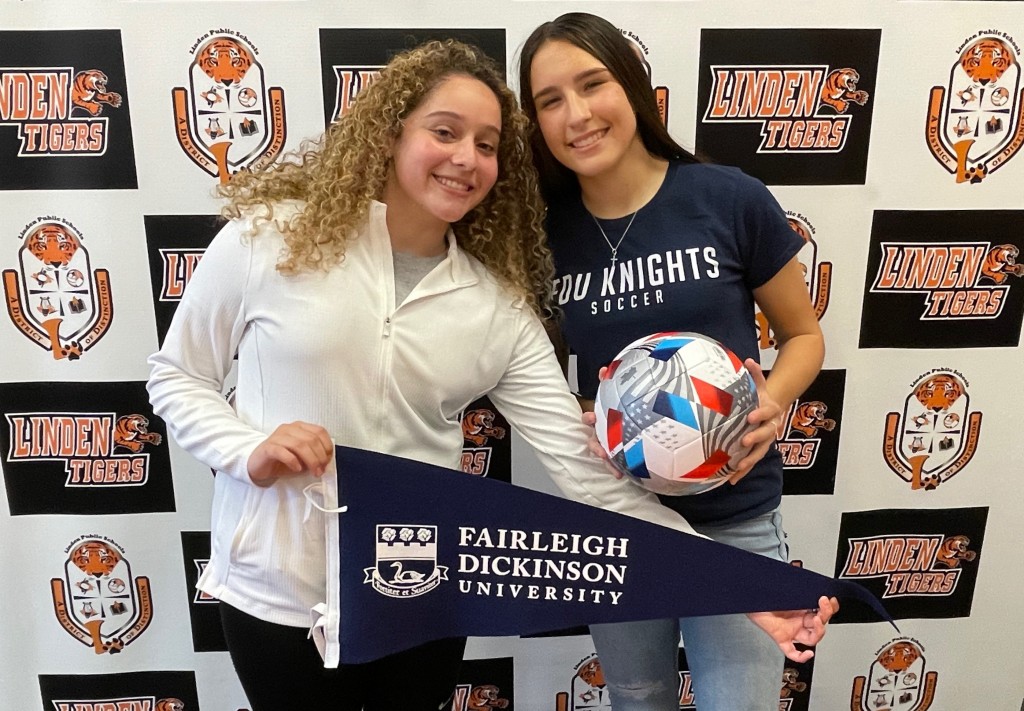 Labrador said it was an emotional moment when she learned of her scholar athlete award during a Zoom call at her home.

With all the work it took to earn the honor, Labrador said it was all a blur.

“Honestly, I barely remember doing everything,” she said. “Every day I just had to do so much, and I’m surprised that I got up every day to do it. I would wake up at 6 o’clock for ROTC practice in the morning, go to school until 2:45, then practice or games until 5, 6, 7, and then come home and study and do homework. It was a lot, but honestly if I look back I don’t even remember doing it all.” 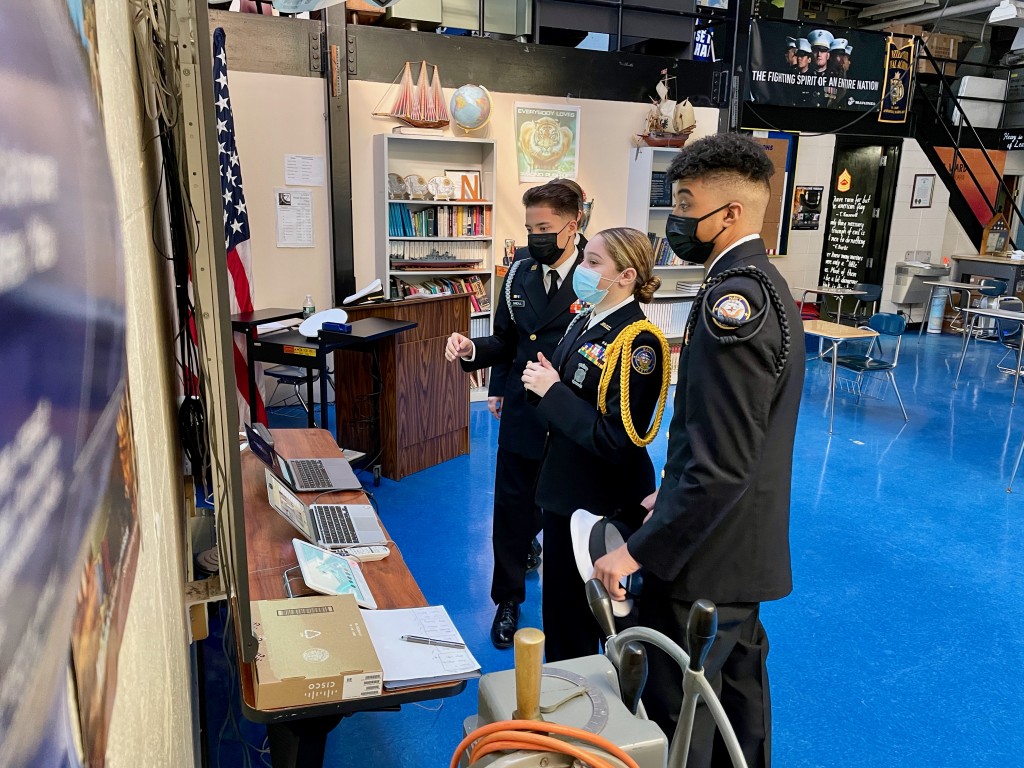 On top of their regular schoolwork and their athletics commitments, Garcia and Labrador were responsible for overseeing 450 cadets as the top two officers in the student-run NJROTC program.

“Those two really held the NJROTC program together during virtual learning,” said Commander Boyd Decker, senior Naval Science instructor for the NJROTC program. “They took that on in what you would have thought would have really been a lost year for NJROTC because we couldn’t be here in person and we couldn’t do all the normal NJROTC things. They took on making sure that we all stayed together and we all communicated.

“They really kept NJROTC alive going into next year.”

Decker lauded Garcia and Labrador for their dedication and leadership – something he recognized in them from the start.

“Going back to freshman year, you could just see how special these two kids were,” he said. “They stood out from the very beginning. Their maturity and their abilities stood out even among other elite and stellar cadets. I saw them do things throughout their four years that left me in awe sometimes.

“I will miss them immensely.”