September 24, 2021In The newsby Jonathan Koziol 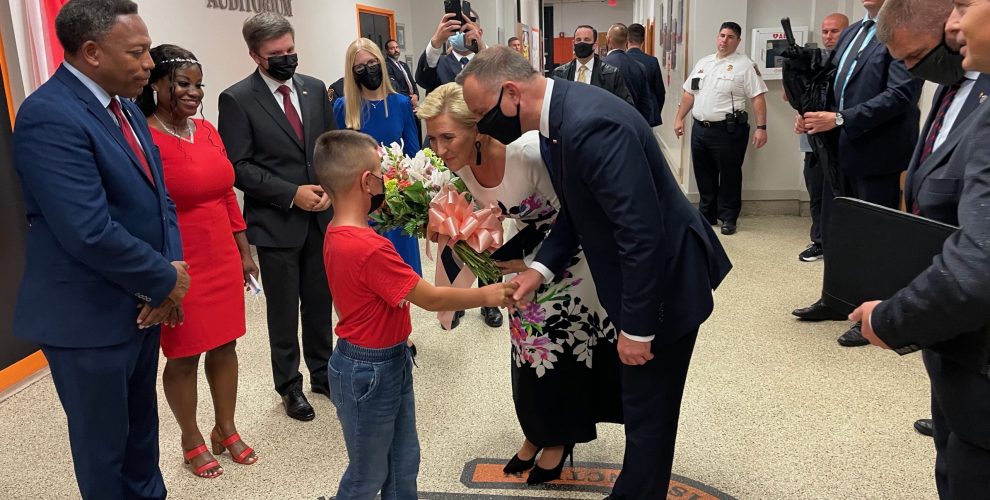 Linden’s Polish community got a special honor for Polish Heritage Month when President Adrzej Duda of Poland visited for a gala event held in the Linden High School auditorium.

The event, organized and supervised by Mayor Derek Armstead, the City of Linden, and the Polish Consulate, brought Polish heritage groups from around the Tri-State Area to greet President Duda at LHS.

Students from Linden were invited to greet the president and perform during the ceremony. Soehl Middle School eighth-grader Natalia Prajzner sang the Polish and American national anthems, and Soehl eighth-grader Marcelina Domaradzka closed out the ceremony by singing “Uwierz Polsko!”  or “Believe Poland!”

Linden High School students greeted the president when he entered Linden High School. They were supervised by LHS English as a Second Language teacher Anna Zolotucha-Skiba. Many of the students were former students at the Polish Cultural Foundation School, where they were taught Polish traditions and culture by Anna Pelesz, an ESL teacher at School No. 6, who was also in attendance.

The LHS auditorium, normally decorated in orange and black for special occasions, was adorned in the red and white colors of the Polish flag. Polish and American flags lined the back of the high school’s stage.

Mayor Armstead presented President Duda with the key to the city, and spoke to those gathered – partially in Polish – about the importance of Linden’s Polish community.

“I am honored that you came here today, I really am,” he said to President Duda. “In Linden, our Polish-American residents are major contributing members of our community. They are owners of many small business; many are helping to redevelop and build homes in our town. They are hard-working, highly educated, entrepreneurial people. We are very proud of our Polish friends and neighbors and excited to celebrate with the president of Poland this evening.”

In his speech in Polish, President Duda welcomed all the Polish-American organizations from around the Tri-State Area, thanked parents and educators for raising the young generation bilingually, and teaching them about the culture and traditions of Poland.

Career awareness gets a boost for students in middle grades

$58,000 from Phillips 66 funds science kits for all second-graders
Comments are closed.
View Calendar